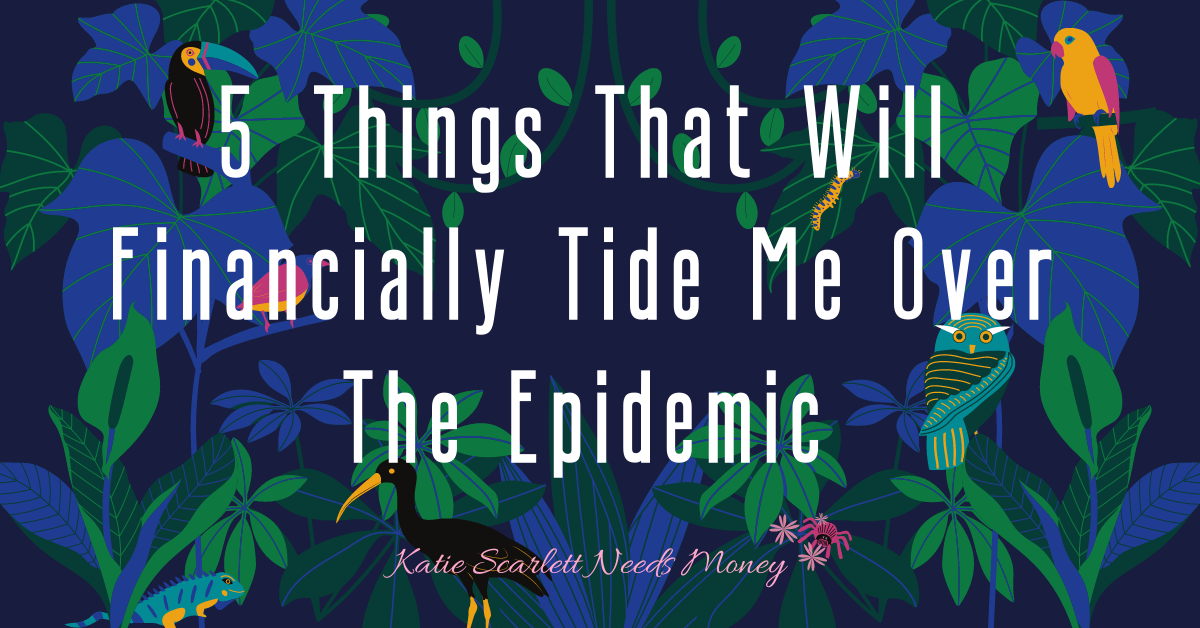 Now that the entire world is being ravaged by the novel coronavirus, I feel paralyzed.  Although we felt the effects of the COVID-19 epidemic here in South Korea ahead of the rest of the world (with the exception of China), I wasn’t as scared then as I am now.

As a history and science enthusiast, I know that we’ve been at this crossroad hundreds of times in the past. We’ve overcome so much worse as a species. As a secular humanist, I have faith in our capacity to find a way out of this predicament. Didn’t we survive from being down to around 40 individuals to growing to more than 7 billion people? Nothing will save us from this epidemic other than our disproportionately large brains and capacity to effectively work together (even though it looks like we’re struggling to do so right now).

So in the past few days, I’ve been trying to keep my spirits up by letting go of my instinct to be productive and do things. I’ve resumed my yoga practice, systematically practiced ukulele, and installed a treadmill in my living room. Of course I still attend to work-related tasks since they still keep coming in but I now have a lot of time freed up.

I’m not in a rush to know and learn things to boost my resume and impress future potential employers or to be honest, impress random attractive and/or rich but low-profile but powerful member of the intellectual elite (What?, I need validation from my intellectual superiors!).

One of my innovations for staying at home is working out to prepare for an imaginary zombie apocalypse. When the people of 16th century Joseon are being chased by zombies in the Netflix series Kingdom on tv, I run on my treadmill at the same time. It’s doing wonders for my endurance! The next step is to maximize my home gym and bench press to build strength. In case I need to run from zombies while carrying something heavy, like a child or artifact that will save the kingdom or aristocracy or something.

You may think that I’m being very flippant by making light of these things. But I’m not. Again, I’m scared AF. Like most Filipinos, I’m frustrated and worried, and I’m losing hope. Our leaders can’t just keep on praising the Filipino people’s amazingly resilient spirit to overcome tragedy despite official help.

To paraphrase gymnastics legend Simone Biles, while don’t our leaders and officials amaze us for a change?

We know the Filipino spirit is resilient because we can bounce back with our light hearts unchanged. Please stop abusing our resilience.

The current developments in the Philippines is especially galling when compared to how another democratic country is treating its citizens. Despite whatever is circulating on social media in the Philippines, South Koreans are very demanding, expects the best from their government, and are easily disappointed with leaders and ready to kick these leaders out of office when found to be criminally negligent and deceitful.

If you live in Seoul, you’d know to avoid Gwanghwamun Square, where the giant statue of King Sejong sits in front of the Gyeongbok Palace, both near the President’s Blue House, every weekend because it’s always filled with people protesting, counter-protesting, and just basically demonstrating to have their voices heard. Yet, nobody is telling Koreans to stop enjoying their democratic rights to have their concerns aired and to “cooperate nalang” (just cooperate and by implication, just shut your trap).

It feels nice to live in a country where citizens (and to an extent, foreign residents) are made to feel important and valued. Too bad that country’s not mine.

I also admire Korea’s commitment to democratic principles while finding ways to defeat the epidemic. No hiding of information crucial to public health, no censorship, and transparency and equity in distributing resources, such as face masks.

And just in case somebody’s thinking of telling me to move to Korea, 1. I’m already here, 2. no, I don’t want to be a Korean citizen, and 3. I’m a tax-payer and an investor so I contribute to the Philippine economy.

On the money front, the financial decisions I have made in the past are helping me and my family tremendously. Planning, preparation, and a little bit of luck is key to keeping financially stable during these times.

First of all, I’m so happy that I pursued a career path that is decoupled from the economy. Meaning, whatever happens to the economy, my job is safe. I won’t be in any danger of being downsized or let go for lack of clients.

Although recession-proofing my career was not my main goal when I took this job, I’m grateful that I am in a position to help my family during this crisis and the hardships that’s waiting.

Many economic experts predict that in a few months, there will be a world-wide recession. Some countries are already preparing their war chests to mitigate the damage to their respective economies, like Germany, South Korea, and the USA. But at the time of writing, the Philippines has not yet laid out any plans to address the coming recession. So we can expect high inflation, people unable to sell their investments or desperately selling at a loss, and of course, many lost jobs.

We can’t be sure when the world economy will recover but life and its accompanying expenses, go on.

2. Health insurance coverage for everyone

Although the Department of Health mentioned that testing for COVID-19 will be free, there are a lot of believable Facebook posts saying that they were charged for testing. Or actually, while attempting and failing, to be tested.

Hospitalization for COVID is supposed to be free as well, but most public hospitals and even most of the private hospitals are overwhelmed with patients. I hope nobody in the family gets infected or needs hospitalization at this time but having health insurance for my child and parents is one less thing to worry about.

We renewed my father’s Maxicare Primagold Gold membership when it expired last month so he’s got coverage again. My mother is covered with my sister’s work health insurance. Their PhilHealth coverage is fully updated, a lesson learned from my mother’s hospitalization in the last quarter of 2019.

I’ve here mentioned a lot of times how paranoid I am of dying and leaving my child and parents destitute. It may sound macabre but I’m constantly thinking about the possibility of me dying and how my loved ones will fare when I’m gone.

Right now, I have 2 life insurance policies, one in the Philippines and one in Korea. Plus one policy coverage from work. In case I die because of COVID-19, my family will have enough to send my kid to college (and grad school) and to help my parents set up a business or a source of income.

When everything’s locked down and people are scrambling to stock up on food and other emergency resources, cash is king. Sure, you can still use your credit card to buy from the grocery store, but with government restricting movement, a lot of people would eventually be unable to travel all the way to a store that accepts credit cards. Wet markets and mobile palengkes operated by some LGUs mostly accept cash.

Additionally, you still have to pay the things charged against your card, which again requires cash.

Many people earn their living on a “no-work, no-pay” basis.  This includes those who belong to the informal sector and the gig economy. My parents’ source of additional income is through Grab, driven by my brother. Since Grab operations have ceased, a source of income has been lost for my brother and parents.

I’m only hoping that my parents have some money stashed away. We don’t need to dip into my emergency fund just yet, but if we do, it’s ready.

One challenge is that the funds are in a bank account and not in actual, literal cash in a box at home. But since almost everyone I transact with have online banking these days, having the money in a bank with a great online banking service and mobile app is sufficient.

I paid up the Pag-IBIG loan for the house where my parents are staying. Although the title has not yet been transferred to me because all government offices are closed, we are in no danger of being evicted and being homeless.

As a long-term investor whose horizon is several decades from now, I am not too worried about the decreasing value of my investments. I’m also a Boglehead, which means I subscribe to the belief that the best investments are placed in low-charge index funds.

So even though the Philippine Stock Exchange has been acting crazy since the Enhanced Community Quarantine was announced, I didn’t panic and continued to stick to my investment plan. Sure, First Metro ETF (FMETF)’s stock price is currently at P81.60, way below it’s price just a couple of months ago, but I have no plans of divesting.

Most of the panic is coming from day traders with holdings in individual stocks and emotional investors who for some reason cannot tolerate to see their portfolio in the red. And I suspect, caused by “gurus” who want to cash in by scaring people into selling their holdings at low prices.

If you’re one of these people, you may have to start practicing mindfulness because you will be in for a long and unpleasant ride. But those who have the mental fortitude (and enough liquidity) to tough it out will come out of the other end just fine. Not in a few months of course, but in the long-run, the stock market has always recovered from recessions.

Among the biggest loser during the recession are people who have substantial investments in the stock market and are about to retire in the next few years. If they’re lucky, they have enough cash saved and have diversified their investments to include other instruments, such as bonds and retail treasury bonds (RTBs).

If not, then they may be forced to sell their shares at a loss AND taxed at .06% (stock transaction tax).

Those who have years or at least a decade before retirement will have enough time to recover value and reallocate their portfolio.

How are you doing right now? I hope you and your family are safe and healthy during this quarantine.

Are you financially prepared if the quarantine period is extended? Let me know in the comments!

PrevPreviousPag-IBIG MP2 versus SSS funds – Which is better?
NextWomen, Relationships, and MoneyNext