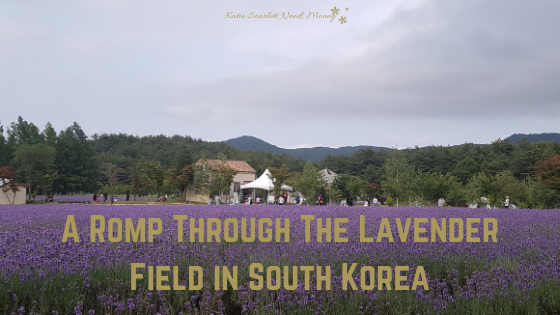 Not many people know that there is a lavender field in South Korea, and what’s more, that the farm is located in Gangwon Province, more or less only a couple of hours away from Seoul. A day trip to the field is well worth the effort of commuting to the northeasternmost county in South Korea. It’s also great news for people who want to see and experience lavender fields but cannot/do not want to go to Europe.

The Hani Lavender Farm is located in the northernmost county of Gangwon Province, to the north of the traditional Korean summer destination Sokcho, facing the East Sea/Sea of Japan. Goseong-gun in Gangwon-do should not be confused with Goseong-gun in Gyeongsangnam-do, where the Goseong Dinosaur Museum and the Sanjogam County Park are located.

For reference, Goseong-gun, Gangwon-do is in the same province as Gangneung where the 2018 Olympics was held, but way up north. Goseong-gun, Gyeonsangnam-do, where one of the largest dinosaur footprints sites in the world is located, is in the south, towards the direction of Busan.

I am a huge lavender enthusiast. I light lavender Yankee Candle to relax before I sleep. I use lavender fabric softener and spray for my clothes. In Manila, I tried growing a lavender hedge but it was destroyed by our maliciously playful husky.

When I travel, I bring lavender sachets from Yankee Candle and a lavender eye mask, which I got in Hani Lavender Farm when I visited last year. It’s still working and still smells of lavender almost a year later.

Naturally, one of my future travel plans was to go to the famous lavender fields in France. Fortunately, I read about Hani Lavender Farm in an online Korean magazine, which means I don’t have to go to Europe anymore just to see a lot of lavenders.

WHY VISIT THE HANI LAVENDER FARM

Hani Lavender Farm is the only lavender farm in South Korea. Because of its picturesque setting – a sea of lavender blooms framed by the  green vegetation of the surrounding mountains – the place is filled with couples taking pre-nuptial photos or selfies while kissing. It’s also a popular place for families.

The farm holds an annual festival usually in June, and conducts various activities and programs such as a music show, gardening class, oil distilling demonstration, as well as crafts. However, people can also visit them even outside of festival dates, until the lavenders are in bloom, I suppose.

In 2017, the farm closed in October, so make sure to contact Hani Farm when you’re planning to visit outside of the general dates/immediate months before and after the festival. It’s probably best to email them instead of calling so that both parties can Google Translate the conversation. Their email address is baiasse@naver.com.

The farm has a shop where you can buy lavender-scented products. I bought bottles of lavender water, sachets for my closets, and a herbal hot pack which was a nice idea until I microwaved it at home (as instructed) and almost burned down my apartment. So I would probably return there again in the next few months just to buy a new one, probably in September or October when the lavenders are harvested.

There is also a small food stand serving coffee, teas, and cookies. I tried the lavender iced tea but it tasted like soap. Ew.

As I said earlier, the place is very picturesque and I was in heaven because of the lavender scent everywhere. The air was also full of the humming of dumbledores, bees! It was very musical.

You can visit the farm’s website or its Facebook page to check the activities during the festival.

[bctt tweet=”The Lavender Festival in Hani Lavender Park in South Korea usually happens in June. In 2018, it was held on June 1 to 21. No announcements yet for 2019. ” username=”MeKatieScarlett”]

HOW TO GO TO THE HANI LAVENDER FARM

The easiest way to get to Hani Lavender Farm is to join an organized tour, especially when you’re not comfortable commuting in Korea. There are no announcements yet when the tours will start accepting bookings but regularly come back to this site for updates.

Another way is by bus to Ganseong Station from Dong Seoul Bus Terminal. From Ganseong Terminal, take a cab to Hani Lavender Farm. Since the farm is in the middle of nowhere, don’t panic when the driver brings you to a seemingly isolated area. The farm  is far from the main road.

To get a cab from the farm to the station, you can ask the farm staff to help you call a cab. They’re very helpful there and I’m sure they will assist visitors.

To get to Dong Seoul Bus Station, take the subway Line 2 and get off at Gangbyeon Station, exit 4.

Most people who go to the farm get there by driving. Just enter their address 786-5 Eocheon-ri, Ganseong-eub, Goseong-gun, Gangwon-do, to the car GPS and you’re good to go.

Crucial tip: Make sure that you leave for the farm early in the day since the last bus from Ganseong to Seoul leaves at 4-4:30 p.m. One friend left for the farm in the afternoon and didn’t have the time to go to the actual farm since she had to take the bus right away going back to Seoul.

Do you like the scent of lavenders? Maybe you should swing by this lavender farm when you visit South Korea next time.