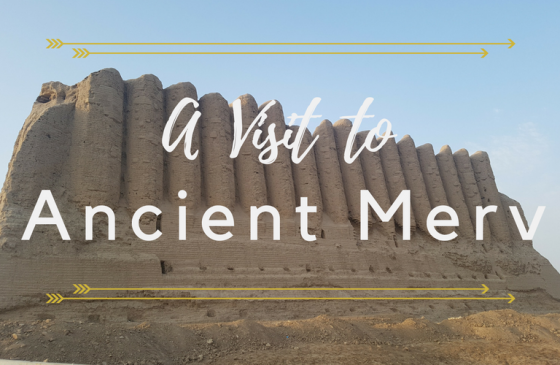 After my relatively painless border crossing from Iran, I was pumped to finally start the next leg of my Silk Road journey. This time visiting Ancient Merv, located near one of Turkmenistan’s largest cities, Mary.

Waiting for me right outside the border gates was Sergey*, my local tour guide. My first request to Sergey was to find me a bottle of Coke, stat! I have been bamboozled into imbibing Zam zam – Iran’s version of Coke – due to its suspiciously Coke-like packaging. Like its originator Pepsi, it wasn’t good enough for my discerning palate. I swear my taste buds can tell the difference.

* Name has been changed for security.

After exiting Iran, I marveled at my regained freedom of riding in a car, walking about, and generally just existing, headscarf-free. I feel I only allowed myself to realize how constricted I was while in Iran after crossing the border.

Apart from getting rid of my hair covering, being in Turkmenistan just felt totally alien for me. The people look different from Persians of course, and the different language and culture are expected.

But there were also subtle cultural cues that you feel deep inside are incongruent but can’t verbalize or actually pinpoint. It was like being in the passenger seat of a vehicle in a country where they drive on the left side of the road when you’re used to people driving on the right side. It doesn’t affect you directly since you’re not the one driving, but your subconscious tells you something is not quite right.

This was compounded by the fact that the Turkmenistan side of the Sarakhs border looked nothing like the Iranian side; it was in the middle of nowhere and the only building within eyesight is Immigration where I just emerged from, like a bizarre cabinet to Twilight Zone instead of Narnia.

Mary is around 280 kilometers from Sarakhs, about 3 hours of driving through bad roads, which improved tremendously upon approach to the city.

While in Turkmenistan, get used to authorities checking your passport and visa every tens of kilometers or so. It’s not just foreigners who have to undergo these constant checks; this is how it goes for everybody, including locals, who patiently wait for their turn to be inspected by authorities at every stop.

Another jarring thing that happened was that while having my lunch in a local restaurant/bar, I finally got to see Western pop music again after what seemed like months (I’m obviously being over dramatic; I’ve only been in Iran for a few days). But it was a little strange watching Justin Beiber and Fonsi singing Despacito in Russian.

Nowadays, there are very few (or actually zero) people living in Merv. Visitors who wish to visit longer or spend the night have to stay in Mary as there are no hotels and other establishments in Merv. Zero. We had to make sure that we were out of the complex before sunset since there were no street lights nor residential buildings around.

The Long and Distinguished History of Merv 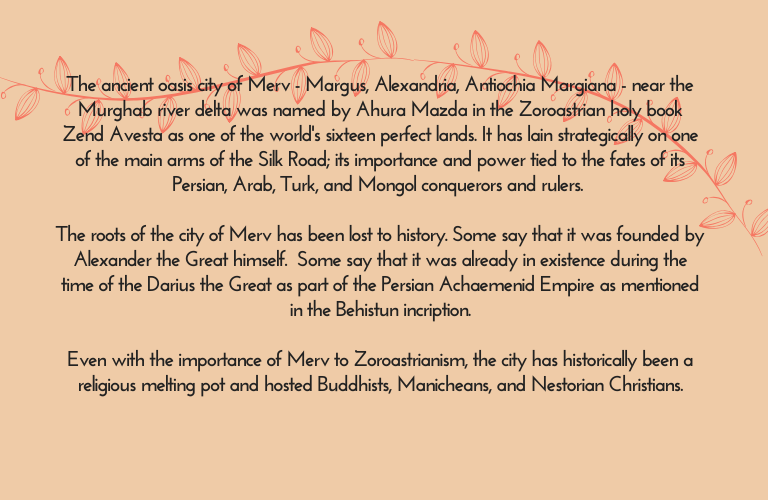 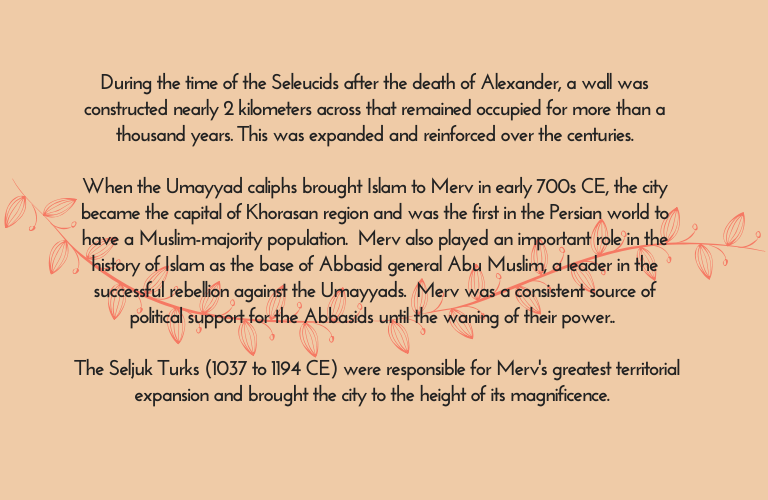 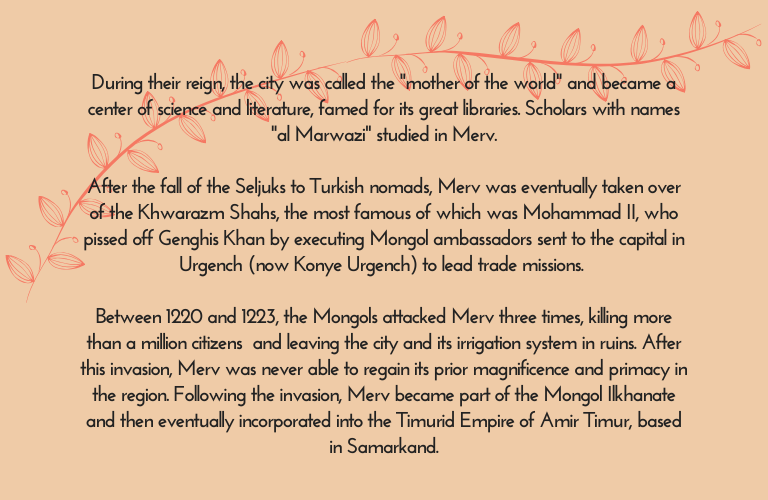 The UNESCO World Heritage citation for Ancient Merv states that it is the biggest and most well-preserved of Silk Road’s oasis-cities with a history spanning 4,000 years. It’s a place you should not miss when in Central Asia, or if you’re a history enthusiast. You MUST go there.

A large part of the Ancient Merv complex is now a necropolis, which means that people have to leave before sunset because it is considered haram to stay in a necropolis after the sun has fallen.

It was evident that the complex was being prepared for the influx of tourists, most probably domestic ones (international tourism seems limited in the immediate future) since the major structures and archaeological remains were in the process of preservation and reinforcement from further degradation.

The more important clues were the cashier booths installed in front of some buildings, for example, in Sultan Sanjar mausoleum, marring the view.

There are absolutely no public transportation within the complex, so to get here, you have to join a tour group or hire a tour guide with car.

The Greater and Little Kyz Kala are two of the tallest koshk, or fortresses, in Merv, located just outside of its walls. The distinctive features of Kyz Kala were constructed during the time of the Sassanids in the 7th century CE and were in use until 600 years later by the Seljuk Turks. Kyz means girl or maiden in the Turkmen language.

Legend has it that forty girls hid and eventually committed suicide at the Greater Kyz Kala when they saw what the Mongol conquerors have done to Merv and its inhabitants.

At the time of my visit (October 2017), the Greater Kyz Kala was being renovated under the joint efforts of the US Embassy, Turkmenistan government, and UNESCO. I was not able to go inside the structure or approach it closer than the wire fences would allow.

Fortunately, the Little Kyz Kala, around 200 meters away from the Greater Kyz Kala, remained open for exploration, although between the two fortresses, the bigger one is better preserved. Be careful of bees and other desert insects while poking around.

Gyaur Kala and its citadel, Erk Kala (citadel castle), was the first city that emerged in Merv, constructed in the 6th century BCE as part of the Persian Achaemenid Empire or possibly by their predecessors, the Medes. It was this part of Merv that was mentioned in the Behistun Rock as Margiana.

These fortresses were later used as the acropolis for a Hellenistic city under the Seleucids, and eventually as the Arc of an Islamic city.

The Erk Kala stands at 30 meters, enclosing 200 hectares, overlooking the mostly flat landscape, making it a great location to observe Merv from above.

Merv is a pilgrimage site for Muslims due to the presence of various holy sites. I encountered motorcycle-riding local tourists visiting the mausolea of two Ashkabs, “standard bearers ” of Prophet Mohammad, al-Hakim ibn Amr al-Jifari and Buraida ibn al-Huseib al-Aslami, who brought Islam to Central Asia.

The mausolea are framed by two iwan or portal, decorated by turquoise and blue tiles in geometric design from the Timurid period.

In front of the mausolea is a now non-functional (dirty) water cistern.

The mausoleum of Sultan Sanjar sits in what was originally the great Islamic city of Sultan Kala in the Merv complex, which may have been the largest city in the world during the 12th century CE.

The mausoleum was famous for its magnificent turquoise dome that, according to legend, could be spotted a full day’s march away across the desert.

It was burnt and destroyed by the Mongols during their invasion.

Before it was destroyed, Merv was capital of the Seljuk Empire, who made it a great learning center to rival Samarkand, Bukhara, and Baghdad. During this time, Merv attracted famous scholars such as the poet, scientist, and mathematician Omar Khayyam (whose tomb can be found in Nishapur, outside of Mashhad in Iran. Unfortunately, I wasn’t able to visit) and Khayyam’s student, the polymath Abd al-Rahman al-Khazini, considered as the greatest scholar to come from Merv.

Scholars with al-Marwazi attached to their names were from Merv.

The shrine of Yusuf Hamadani can be found outside the walls of Ancient Merv complex. Although guidebooks and Lonely Planet said that it is not open to non-Muslims, the grounds are open for a visit and the madrassah and mosque can be appreciated from the outside. I also got a little peak of the room where students and other overnight visitors got to stay. It was surprisingly small.

The shrine is an important pilgrimage site in Turkmenistan and one of the most holy places in Central Asia. It was rebuilt in the years after the country’s independence from the USSR.

Abu Yaqub Yusuf Hamadani was first of the group of Central Asian Sufi teachers known simply as Khwajagan (the Masters). He was an expert jurist and ascetic and pilgrims visit his shrine for miracles.

I finished the tour of the Ancient Merv complex and Yusuf Hamadani Shrine in about half a day, mostly marveling at how a once great and powerful city was reduced to ruins.

The area was continuously occupied for thousands of years and now it’s mostly mud.

I wondered if Omar Khayyam and al-Khazini ever imagined that their city will be practically wiped out from the face of the Earth. And to think that many of our modern great cities have only been in existence for much shorter times.

After Merv, I took the overnight train from Mary to Ashgabat, one of the things I wanted to experience while in Turkmenistan.

My tour covered all expenses I had in the country, including meals and tickets, so I can’t remember how much the entrance to the Ancient Merv complex costs. Although I’ve read of many travelers DIY-ing it in Turkmenistan, I decided that hiring a tour guide was worth the expense.

First of all, I didn’t have to stress about the language barrier. I also avoided wasting my limited stay in the country (I was on a transit visa which allowed me 4 days) and enabled me to visit all the places I wanted.

It wasn’t even that expensive when you consider that group tours offered by international travel agencies run several thousands of dollars. My tour cost around a thousand and a half US dollar-ish.