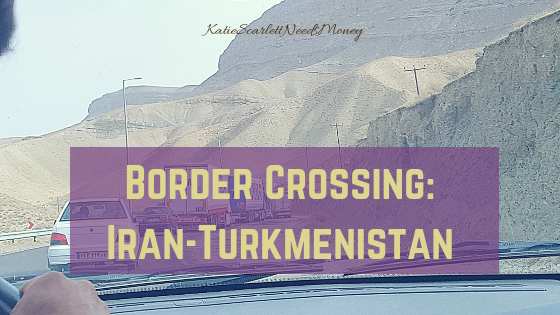 This post was first published in my old travel blog, Erudite Traveller on 20 December 2017.

One of the things I obsessively prepared for during the planning stage of my Silk Road 2017 trip was how to cross to Turkmenistan, a land-locked country with border crossings from Iran, Afghanistan, Kazakhstan, and Uzbekistan. In the end, I opted to cross the Iran-Turkmenistan border in Sarakhs, a city straddling the two countries.

Getting through the border between the two countries was a surreal experience. The brown and desolate winding mountains and sand dunes in the Iranian side, despite the presence of giant trucks, gas pipelines in the distance, and the occasional bicyclist, evoked a strong feeling that you are traversing the Silk Road in the ancient times.

I have to admit that after several days of the paranoia of having to cover my hair and well, basically entire body while in Iran, I was looking forward to ditching my head cover.

Early on, I decided to cross to Turkmenistan from Iran instead of from Afghanistan (out of the question at this time due to the security situation) and Kazakhstan (too remote), while I identified Tashkent, Uzbekistan as my exit point from the region since there are direct flights from Tashkent to Seoul, where I am based.

This meant my that my two-week trip was: Iran >> Turkmenistan >> Uzbekistan.

Short of flying directly to Ashgabat, this was the most time-efficient way I found to explore Turkmenistan. This route covers the historical sites in Merv (ancient Margiana), Old Nisa, and Konye-Urgench, the amazing marble and gold capital in Ashgabat, the abandoned gas mine in Darvaza, also called the Gates of Hell, and of course, my main goal: riding the oldest horse breed in the world and real-life Shadowfax: the Akhal Teke.

There are four Iran-Turkmenistan border crossings but I chose to cross via Sarakhs/Sarahs since I wanted to go to Merv first, a 4-hour drive away from the border. From Mary, the town next to Merv, I took an overnight train to Ashgabat.

People who want to go directly to Ashgabat may opt to cross the border in Gaudan – Bagjiran.

From Mashhad to the Border

Many backpackers and other travellers choose Mashhad as a home base to plan their trip and border crossing to Turkmenistan. Mashhad being Iran’s second largest city, people either apply for visa or pick up their visas from the Turkmenistan Consulate there.

From Mashhad, my homestay host Vali and his wife drove me to the border, a trip which took more than 3 hours. I paid US$ 50 for the service.

Crossing the border from the Iranian side was easy and straightforward. There was a short walk from the border gates to the Immigration building, where an official thoroughly checked my luggage and backpack.

He also asked if I brought any illegal medication (meaning codeine) and warned me that if I bring any banned substance to Turkmenistan, I will be detained.

After this, I was instructed to wait for the completion of the immigration processing. The entire thing was over in more or less 30 minutes.

No man's land to Turkmenistan

The immigration offices of Iran and Turkmenistan are separated by a no-man’s land more than a kilometer across. Based on my observation, there is no way for a person to cross the no man’s land on foot.

There is a two-lane road where trucks carrying goods across the border pass and no space for pedestrians. Soldiers from both countries carrying pistols patrol their respective sides.

To cross the no-man’s land, take the shuttle to the Turkmen side (and vice versa if you’re going to Iran). The shuttle is usually parked at the beginning of the two-lane road to the Turkmen border where Iranian officers (not sure if they are immigration officials or soldiers) take a final look at your passport. Turkmen officials will check your passport as soon as your bus crosses the Turkmen side of the no-man’s land, so make sure to have it ready.

As soon as I was on the Turkmenistan side of the no-man’s land, the first thing I did was take off my head cover. 😀

The shuttle charges US$5 per trip (not per person). There was another person who took the shuttle with me and we tried to pay the shuttle driver two five dollar bills, thinking that the fee is US$ 5 per person.  The driver declined and took only one of the bills.

Upon arrival at the Turkmenistan immigration office, I was directed to a small doctor’s office where I wrote down my name on a ledger and was asked several questions about my health. The doctor took my temperature, stuck a post-it on the inside back cover of my passport (probably indicating that I was healthy), then asked me to sit for the next part of the immigration process.

After several minutes, I was asked to enter the main immigration processing area, separated from the waiting area by a glass door. The immigration officials took my biometrics and asked information about my visit: which hotel will I be staying at, cities I will visit, etc . After assuring them that I will be there for transit only on my way to Uzbekistan, they asked me to go back to the waiting area.

I’m not sure if the immigration officials disbelieved my story but they called me again to the main building to talk to their office head, who was very charming by the way so I wasn’t scared or threatened at all, just a bit confused and hungry. I was asked again where I will be staying, where I work and position at work.

After an hour and 15 minutes (just 15 minutes longer than the average crossing/waiting time in the Turkmenistan side of the border!), I was allowed to leave the building and meet my tour guide.

From the immigration building, the parking lot/exit is around 500 meters away. I dragged my luggage all the way to the parking lot, where my tour guide, Sergey, has been waiting for me since 10 a.m. 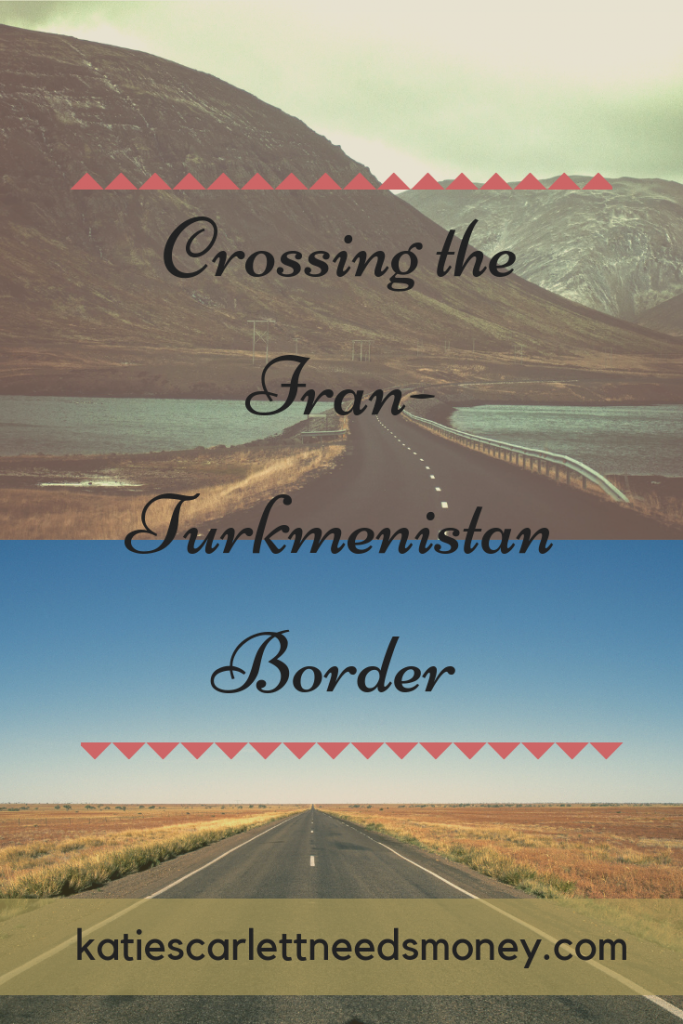 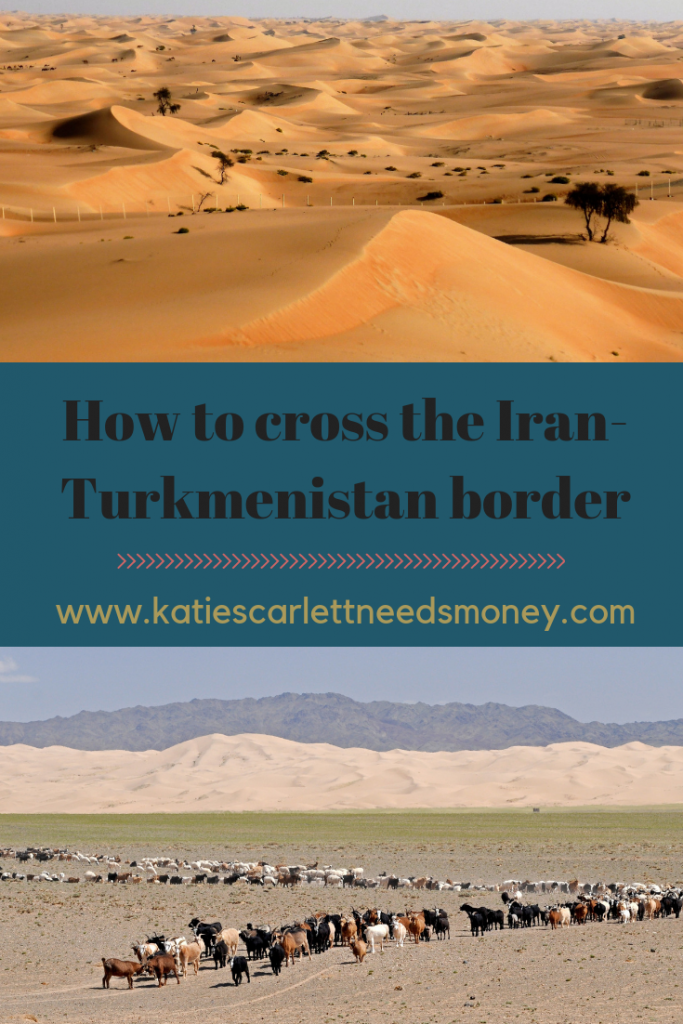 PrevPreviousCommuning with the devout in Mashhad, Iran
NextNet Worth Update and Year (so far) in Review, July 2019Next