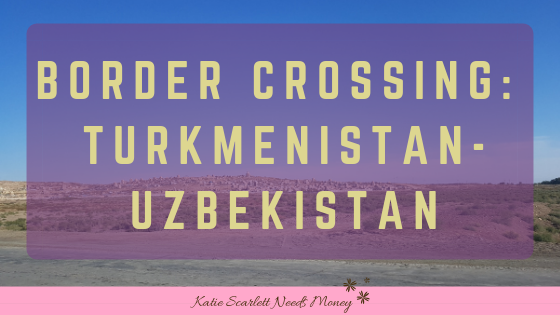 I was given a four-day transit visa by Turkmenistan immigration so I had to leave on time or risk deportation (probably, maybe).After my overnight stay in the Darvaza Gas Crater, fittingly dubbed the Door to Hell by people for its creepy but romantic (a combination that doesn’t work for people) ambience at night then a mid-morning stroll looking at the ruins of Konye-Urgench, I opted to cross the border to Uzbekistan from Konye-Urgench instead of from Dashoguz.

I was worried that I won’t have enough time to get out of Turkmenistan if I travel from Konye-Urgench to Dashoguz, which Sergey my guide said can take up to 2 hours.

So at around 2 pm, Sergey brought me to the Immigration office in Konye-Urgench. The guard even let him accompany me to the main building itself, around 300 meters away from the gate.

Clearing Turkmenistan immigration was so much easier than when I entered the country. Sergey had a chat with the official, who took my passport in the backroom. I waited for around half an hour all the while chatting with Sergey about the next leg of my trip so I didn’t mind the wait.

By the way, there were just a couple of people besides me going through immigration in the Konye-Urgench – Hojayli border crossing. I suppose not that many people cross here; I didn’t see any cars or trucks passing by.

This short strip of land had slightly overgrown, wild vegetation, tall grasses, and some bushes. The road was made of dirt and looked like it was strictly only for walking. Not that I’m advocating it or anything but in case you encounter problems with your visa, you can probably stay in the no-man’s land for a few days as long as you bring your own provisions, including water.

Upon arriving on the Uzbek side, I entered a gate, which led to another gate manned by a guard who let me in and pointed me to the immigration office.

The forms were available in Uzbek, Russian, and English so there was no problem in filling it out.

Ominously, there were huge posters about the danger of rabies complete with photos of rabid dogs and people. This scared me because on the top of my list of most horrible ways to die is dying by rabies (along with being run over by a dump truck, etc.). During my entire stay in Uzbekistan, I was mindful of any encounters with strays. Now that I think about it, I don’t remember seeing any dog during my stay there…

After getting my biometric information (photo, fingerprints), I was cleared for immigration. Since I was the only client there, I had to wait for a little more than 10 minutes for the official to show up and process me. Including the wait, I was out of there in 30 minutes.

The long adventure from Hojayli to Khiva

From the Uzbek immigration office, I walked for about 100 meters to the gate towards the main road anticipating a line of cabs waiting for passengers to Khiva – only to find the lone ancient Lada parked without its driver.

Unfortunately for me, it appeared that this particular exit is not as well used as the other border points.  I was there on a Thursday. I waited for more than 20 minutes for the Lada driver to appear, even after the immigration guard told me to get lost (I assumed) in Uzbek via loudspeakers.

I finally decided that my best course of action was to hail ANY passing vehicle willing to take me to Nukus, and take a cab from Nukus to Khiva.

Passing vehicles in the area are few and far between. 1 van-type vehicle stopped when I hailed it but he was going the other way and took the other woman who just exited immigration as a passenger.

I was finally able to get a ride to Nukus from a guy driving his sedan. As soon as I opened the car door I offered to pay him US$10 to take me to Nukus. The extent of our conversation was me saying Nukus – ten dollars, and him nodding his head.

It’s regrettable that I was not able to have conversations with locals I met on the road because of language barriers, but until somebody invents the Babelfish, this cannot be helped.

The trip from the border, which is located on the outskirts of the town of Hojayli to Nukus, took around 30 minutes. We passed by some very picturesque hillside graveyards and remains of fortresses along the way.

The driver brought me to the spot where cabs to Khiva congregate. There were several drivers waiting and I tried negotiating for a private cab to Khiva since I was already desperate for a shower after bathing in the dust of the Karakum desert in the past 2 days.

One driver said he can take me to Khiva for US$50, which, although I thought it was higher than the normal price, I agreed to since Khiva is 201 kilometers away. All the while I thought we were negotiating for a private cab but then he tried to stick me into a cab with 3 other people.

The driver tried to rip me off and I instantly felt comfortable, knowing that I’m back in my comfort zone of dealing with, dodging, and outsmarting corruptible and corrupt people. I felt right at home.

Later in my journey, I found the statue of Nasreddin Hoja in Bukhara, the famous trickster-scholar. The driver looked like that statue.

I insisted that he bring me to Khiva in a private cab and he grudgingly complied, although I suspected that he will try to subcontract the job to another person. This suspicion proved correct. After an hour into the trip, we made a stop to a village and stayed there for 30 minutes. The driver was trying to convince other people to take me to Khiva!

To be honest I didn’t really mind as long as I get to my destination and pay the same amount.

Eventually, another guy barely out of his teens but was so tall he had to stoop to fit into the driver’s seat arrived and asked me to transfer to his car, then we picked up his friend. So I was brought to Khiva by two teenagers who kept on getting calls from their mothers asking for their whereabouts and why they were going to Khiva. It was hilarious.

Apart from the first driver trying to rip me off, the trip went smoothly. Or as smoothly as one can when traveling over bad roads in Uzbekistan’s outer provinces. We encountered a traffic jam while passing through the city of Urgench which added an hour to the trip. I finally arrived in Khiva at 10 p.m., almost 5 hours after crossing the Turkmenistan-Uzbekistan border.

This experience is one of those that proves that the journey is as important as the destination. My favorite travel anecdote so far came from this time.

It turned out that in the farther reaches of Uzbekistan, they use liquefied natural gas for cars. The thing is, this fuel can cause explosions so they make sure that all passengers get off the car and wait at a designated area while the driver fills up. And just in case people refuse to get off, they have giant tarpaulins showing pictures of cars that exploded while refueling.

As a side note, in big cities such as in Tashkent and Samarkand, they don’t make people get off cars anymore for refueling.

Anyway, I got off the cab so that the driver can refuel. I was looking at my phone and mumbling in Tagalog when a guy started talking to me in English, asking me if I’m Filipino and whether I know Manny Pacquiao, the boxer. He told me that he’s a fan and that he’s also a champion boxer in Uzbekistan. In my excitement, I just took a picture but forgot to ask how to write his name, thinking I could just Google it. Then I forgot his name altogether.

I told him that I met Manny Pacquiao for work and we even have a picture together. After I failed to produce said picture (I posted it in my personal Instagram account which I cannot then access as I had no internet), he probably thought I was just making things up, like people who pretend to know movie stars but actually don’t. Haha.

Anyway, I was still excited because, well, I was so far from the Philippines and not that many people are familiar with my country in this part of the world. We were in Mang’it in Karakalpakstan, an autonomous republic in Uzbekistan, which I’m sure nobody in my country has heard of either. I wouldn’t have known about this place if we didn’t stop to refuel.