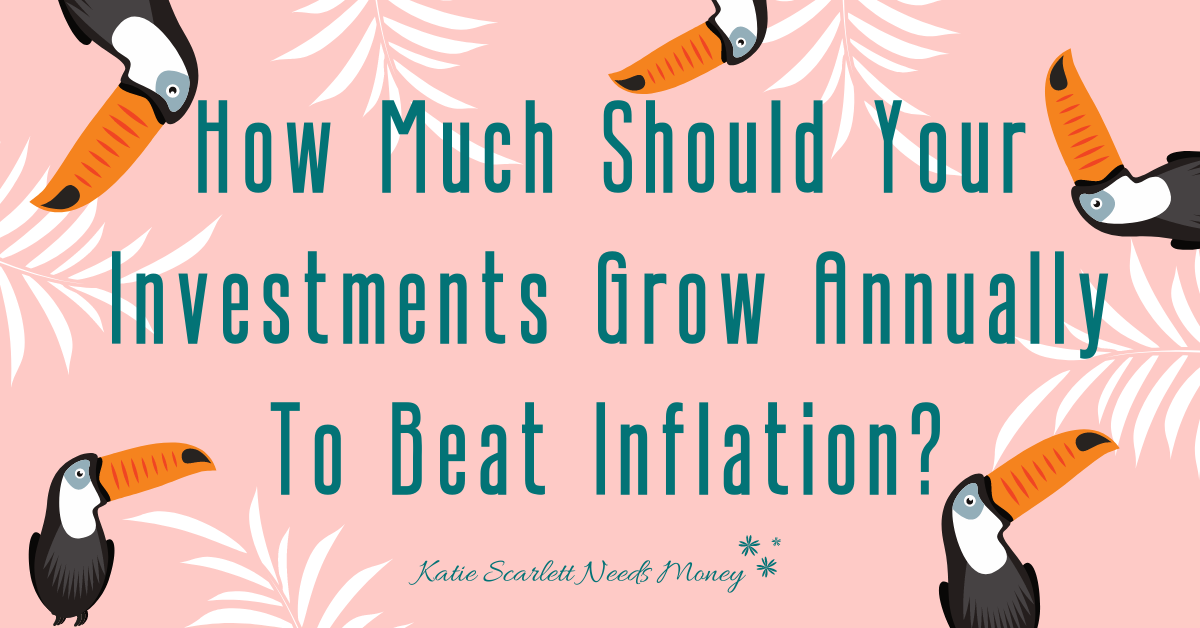 How much should our investments grow each year?

Most of us would answer that our investments should, at the very least, beat inflation.

For many of us, as long as our investments have positive returns, we’re good. Never mind if the said returns are barely able to cover inflation.

In this post, I will reinforce why we should target to beat inflation AND figure out what inflation figure should we use for planning purposes.

But before we start, what does beating the inflation mean in practical terms? To answer this, we have to know:

Inflation, according to Investopedia is:

... a quantitative measure of the rate at which the average price level of a basket of selected goods and services in an economy increases over a period of time. It is the constant rise in the general level of prices where a unit of currency buys less than it did in prior periods. Often expressed as a percentage, inflation indicates a decrease in the purchasing power of a nation’s currency.

For instance, in 1980, the basket of goods and services you want to buy cost Php 100. This is how it will cost in the following years: 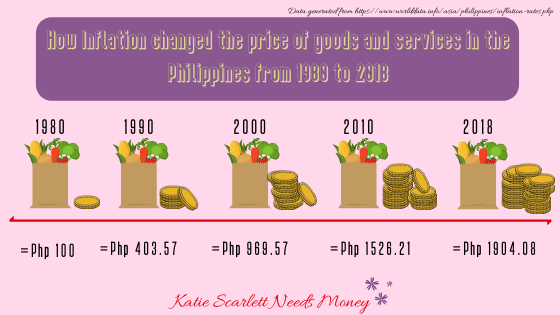 To make your own comparisons, you can use this handy online inflation calculator.

So why the need to keep up with inflation?

Because if your investments do not keep up with inflation, it’s actually losing value because you will not be able to buy the same basket of goods and services for the same amount of money.

Can't we just be happy with any positive growth rate?

The purpose of investing is to grow your money. Growing your money means not only increasing its absolute value, but also increasing its value vis-a-vis inflation, that is, how much that money will be able to buy, year after year.

Say your money grew by 5% in absolute terms but inflation for that same year is at 5.21% (the Philippines’ inflation rate in 2018), that means that despite your investments growing by 5%, it actually lost value because it was not enough to cover the increase in the price of goods of services for that same year.

Again, you are losing the value of your money if you don’t take inflation into account.

Now that we understand why we need to at the very least, beat the inflation rate so that our money will not lose value, we need to figure out which inflation rate data we will use for planning our target annual returns.

2. Which inflation data should we use?

Although many institutions and banks issue their inflation projections, I think we basically have two options for inflation rate data to consider:

It is the PSA that calculates and announces the previous year’s (and month’s and quarter’s) inflation rate while the BSP makes predictions (that is, very educated guess) of what it thinks will be the inflation rate in the future based on indicators.

Inflation Projections by the BSP

We might be tempted to use the BSP’s projected inflation figures to plan our investments. For example, you may:

(Figures from this PNA article.)

But I don’t think it’s a very good idea to use projected numbers. Why?

For the simple reason that inflation is hard to predict, even for the BSP. The BSP regularly adjusts and readjusts its forecasts. And even after readjusting their forecasts a number of times, the final inflation rate would still be different from any of the numbers they previously gave.

Don’t believe me? Here is an example of the BSP’s projections in the past couple of years:

As such, the BSP also raised its inflation forecasts for 2017 and 2018 to 3.5 percent and 3.1 percent from 3.3 percent and 3 percent, respectively, Deputy Governor Diwa C. Guinigundo said. Guinigundo attributed the higher forecasts to increasing fuel prices and the depreciation of the peso since the fourth quarter of 2016.

Good right? The final figure was actually lower than the BSP’s projections.

So, it could go either way. The final figure can be either lower or higher than the BSP’s projections.

In case you’re thinking that this is peculiar only to the present Duterte administration, look at these news report from October 2010 and January 2011:

My point is,  basing your investing plans on the inflation rate projections by the BSP is not a great idea because:

It wouldn’t even help if you regularly adjust your investment allocation and strategy based on the adjustments made by the BSP. In the end, it can still be all wrong.

It doesn’t mean that the BSP is bad at its job. It’s just that a lot of factors affect inflation, many of which are beyond our government’s control. There are too many factors, too many unknowns in the equation.

Additionally, and I think this is very important, if you’re like me who wants to keep your investments simple and stress-free as much as possible, I don’t want to be making adjustments in my investment portfolio every time the BSP adjusts its inflation rate projections. I want to do one thing and then just revisit doing that thing once a year, twice at most.

Another option is to use the average historical inflation rate.

I want to make it clear before continuing that yes, using historical data reveals a hindsight bias.

But, we have no way of predicting what’s going to happen in the future.

So, I think that if we’re going to make plans for anything, using exhaustive historical data is a good start.

Also, the more data points we incorporate, the better we can account for randomness and volatility of the factors that affect inflation.

So if we’re going to base on historical inflation information, our investments should grow on average, at least 8.36%.

Why at least? Because a growth rate of 8.36% will just keep your money at par with inflation. And since we want to gain mooooore than inflation, we should plan to beat 8.36% annual average growth rate.

So let’s say that you were a 20 year-old whippersnapper in 1958 and you wanted to make sure that when you retire in 2018 (you have a very long life), your money will grow at least at the same rate as inflation.

So what should you have done? You should’ve invested your money in financial instruments and other assets that would’ve given you an average annual growth rate of at least 8.36%.

What if remove inflation data from turbulent years (and other outliers)?

I know many of you will think that the 8.36% average annual target growth rate is too high. I agree. But that doesn’t change the fact that that’s how inflation has behaved in the Philippines in the past. I didn’t make up the data. That’s just how it is. We need to suck it up.

You may be thinking: but Katie Scarlett, can’t we just remove those years when the Philippines’ inflation rate were highest because of some event, like during the People Power revolutions?

Some people tell me that I shouldn’t include the data for the years when the first and second People Power Revolutions happened (1986 and 2001, respectively), sure that inflation rates were abnormally high for these years.

There are also other people who think that we should just remove the highest inflation rate because it skews the data (an argument that I don’t agree with). But even removing the data for 1984 when the Philippines reached an eye-popping 49.8% inflation, we would still have an average annual inflation rate of 7.67%.

We can cherry-pick at the information all we want but I’d advise against it. Let’s just embrace the fact that the Philippines has really unpredictable inflation, historically. Instead of ignoring the historical data, why don’t we just plan based on what the data says, especially if you’re investing for the long-term.

Others might say that the government has finally figured out inflation, and that the Philippines will no longer experience unpredictable inflation rate like we did in the past. They will tell me in that:

They are of course correct. Starting 2010, the country’s inflation rate have been low (compared to the past, not compared to other countries). But not only are these data snapshots of the wider picture, it totally ignores the fact that there inflation is affected by so many factors outside of our government’s control.

I don’t think it’s paranoia to consider the fact that the Philippines does not have the sturdiest of democracies and the strongest fundamentals. Its bureaucracies are not efficient, its institutions opaque, and giant corporation are brought down by the whims of those in power.

Add to the mix how sensitive we are to price changes of commodities that we don’t produce, like oil, and sadly now, rice.

For long-term investors such as myself and those who are preparing for long-term goals like retirement in 30 plus years, we need to carefully plan how we should set our investments so that it will “beat the inflation”.

Based on historical PSA data since 1958 to 2018 (2019 inflation data is not yet available at the time of writing), the average inflation rate in the Philippines is 8.36%

For us to beat the inflation, our investments should grow an average of at least 8.36% annually to account for inflation.

Do you consider inflation when you invest? If so, how do you incorporate it to your investing? I’d like to hear your thoughts on this matter.