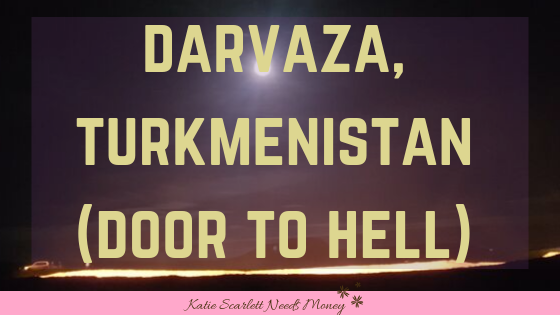 This post was first published in 2017 in my old travel blog, Erudite Traveller.

During the height of the Cold War in the 70s, a team of Soviet geologists looking for oil fields excavated a likely spot in Derweza village in the Karakum desert. Unfortunately, the site they chose was on top of a cavernous pocket of natural gas that was unable to hold all their equipment. This pocket collapsed and emitted poisonous methane gas, killing animals in the vicinity. Those in charge decided to light a flame on top to use up the emitted methane gas, expecting it to flare out in weeks.

Instead of weeks, the gas crater kept on burning for decades.

The Darvaza Gas Crater was a surreal sight in a moonlit night in the middle of the Karakum. The bright red-orange glow on a dark night summons comparisons to hell, leading people to refer to it as the Door to Hell.

Darvaza is halfway between Turkmenistan’s capital, Ashgabat, and Kunye Urgench, near Dashoguz, another major city.

Don’t be deceived though; there’s nothing sinister nor (extremely) dangerous about Darvaza. And under the full Karakum moonlight, it even has a certain desolate and romantic charm. The Darvaza Gas Crater is 259 kilometers or about 4 hours drive away from Ashgabat, the capital of Turkmenistan. It is halfway through to the ancient city of Konye-Urgench, my destination after my overnight tour in Darvaza Gas Crater.

After an early breakfast in the Russian market and a last look around Ashgabat (read my post about Ashgabat here), we went to a supermarket to buy supplies for our overnight stay in Darvaza. There are no restaurants or stores near the gas crater as it is in the middle of the desert. You have to bring all your supplies including drinking water if you want to stay overnight and survive.

I didn’t fail to notice that there were a lot of Korean chocopie brands available in Ashgabat, with entire shelves full of them. I didn’t know people in Ashgabat were that into chocopie.

Instead of the usual sedan that we used while traveling in the city, we switched to a 4×4 truck more suited for navigating the rugged road leading to Dashoguz and sand dunes to the gas crater.

As in my trip from Sarakhs to Mary and then Merv (read about my visit to the ancient Silk Road city of Merv here), the roads outside of Ashgabat were very rugged, with police stops every few kilometers or so, tapering off as you get farther from the capital.

When I travel I play a little game to pass the time. I read this trick from The Dictator’s Handbook by Bruce Bueno de Mesquita and Alastair Smith.

I try to observe how good/bad the roads leading to the capital are, meaning how accessible the capital is for people coming from the provinces. Then compare that to how fast is it to travel from the capital to the nearest international airport.

In most autocratic countries, the roads to international airports are short. This is supposed to mean that autocratic governments do not have high respect for private property, unlike in democratic countries where they have to build long roads in consideration of private property, which governments can’t just seize to make airports. Plus, in case there’s a revolution, the dictator can speedily travel out of the country via the said airport.

On the other hand, it would be in the interest of dictators to keep roads leading to the capital really bad and put barriers along said roads, including regular checkpoints.

True enough, in both Turkmenistan and Uzbekistan, the roads leading to Ashgabat and Tashkent respectively were very bad and people have to pass regular checkpoints before they actually get into the said cities. But once you’re in, the international airports are only more or less 10 to 15 minutes away from any point in the city.

I certainly needed the distraction since there was little to see on the way to Darvaza apart from oil fields and faraway oil pipes. Every now and then we passed by camels left roaming by their owners. Contrary to what other bloggers say, these camels were not feral but were left to roam by their owners who live in nearby villages.

We also passed by other abandoned craters along the way. One was a crater with boiling mud at the bottom where I literally heard the plok-plok-plok of the boiling and still burning mud.

Another was a boiling water crater that has been fenced off. I suspect there may have been some accidents there hence the fence.

We arrived in Darvaza at around 5 p.m., with ample sunlight to hike to the nearby hill and have a look around the desert, pretending that I’m Paul Atreides waiting for a sandworm to ride.

Meanwhile, Sergey was preparing the yurt that he rented for me. I was initially disappointed that I didn’t get to stay in a tent but then night came and the temperature fell. Suddenly felt smug knowing that I won’t freeze in the desert and those other people will need to make do with a tent. Ha!

We were joined by other campers who arrived in their own 4x4s. A vast majority of these travelers were Westerners and there were only two Southeast Asians in the group, me and a Malaysian guy.

We had an excellent barbecue dinner with fruits and bread. No rice though. 🙁 Look, I’m Asian and I need rice for.every.meal. (I had a mini-crisis in Uzbekistan for lack of rice, compounded by lack of sweet coffee that I’m used to taking every morning back home in Seoul.)

The owner of this yurt himself welcomed and showed us the cooking and water provisions for the night. According to Sergey, the yurt owner lives in the nearby village and owns many cattle, making him a rich man.

It was a very cold night since it was already the beginning of fall. I initially thought that the carpets and sleeping bags provided were enough to fight off the cold but I was wrong. I actually demanded that an open fire be brought inside the yurt; otherwise, I will definitely not make it until morning (I’m exaggerating, but only slightly).

Given the option between freezing to death versus the possibility of fire inside the yurt and risk of carbon monoxide poisoning, I obviously thought that the latter was the safer bet.

The other campers told me next morning that they slept (at least tried) in their tents and the cold was almost unbearable. Meanwhile, I had a good night’s sleep inside my yurt. Freezing in the desert just to save $20 didn’t sound like a great deal to me.

At first, I thought that I can manage the temperature with only my regular outfit of leather jacket and jeans but as the sun set, the temperature also progressively got colder. I had to don my fur hat I got from the Russian Market in Ashgabat and borrowed blankets from the yurt. Sufficiently covered, I had a close look at the gas crater in the afternoon sun.

The crater smelled of methane. Even in daylight, the vivid orange fires in the yawning deep crater were scary. The hot winds from the crater slap you in the face when you try to take a closer look.

I’m both impressed and scared that authorities didn’t install fences around the crater. I’m reasonably certain that winds are strong enough to carry people off into the crater. Also, there are fires there! On one hand, they probably hold tourists visiting the crater in high regard: they’re not stupid, immature children that will fall into the gaping fires of the temporal manifestation of hell. On the other hand, they probably didn’t care one whit.

Tip: if ever you fall inside the crater, just stay at the bottom and never attempt to climb up. Also, pray that there’s a crane nearby.

After our barbecue dinner, I brought a bottle of Berk beer and walked towards the crater. Even though it was a starless night and clouds oftentimes covered the moon, it was not hard to navigate from my campsite to the crater. You cannot miss it in the dark.

Nighttime is the best time to see the crater of course, and there were even tourists who had romantic sit-down dinners right beside the crater.

The winds warmed by the fires were like a hot bath in the cold night and the perfect pair for my cold beer. I found the tree trunk I saw earlier that day and just stared at the fires. Just watching the fires glow surrounded by the absolute dark of the surrounding Karakum was a surreal experience.

I may have used the word surreal so many times in this trip but I really was amazed about the wider world and all the things I have not yet and may never, ever, see and experience. The world is so vast.

The following morning, I had a last look at the crater and even did some yoga poses there in the case in the future I get asked: “where is the weirdest, most unusual place had you ever practiced yoga?” I want to be prepared for such eventualities.

After doing my sun salutations, we left for the last stop of the Turkmenistan leg of my Silk Road trip: the tragic Konye-Urgench.

PrevPreviousFIRE-ing in Developing Countries: Does the 4% Safe Withdrawal Rate Apply To Us?
NextReview: Quit Like A Millionaire by Kristy Shen and Bryce LeungNext