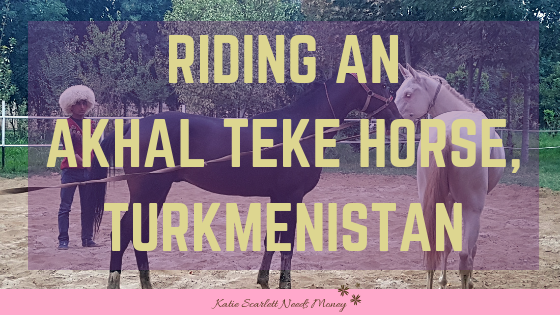 This article was first published in my travel blog, Erudite Traveller, in 2017.

While doing my research for the Turkmenistan leg of my Silk Road trip, I stumbled upon the existence of the Akhal Teke horse.

Akhal Teke horses are famous for their endurance, intelligence, beauty, and the metallic sheen their coats reflect when hit by sunlight. I knew as soon as I read about them that I need to ride an Akhal Teke while in their homeland.

It is said that Bucephalus himself, Alexander the Great’s mount and history’s most famous (real) horse, was an Akhal Teke. Emperor Wu Ti of the Han Dynasty waged two wars to acquire these horses to bring back to China.

Prior to my trip, I asked Sergey, my local guide, to organize a tour to a stable which will allow me, a person who has ever ridden ponies only twice in her life, to ride one of these magnificent horses. Sergey delivered.

A Short Primer on the History of the Akhal Teke

The name Akhal Teke was given by the Russians to horses bred in Turkmenistan. It was known that the best ones were bred by the Teke tribe in the Akhal region.

Ancient historians Herodotus, Xenophon, Strabo, and Appian all referred to Nisean horses, the biggest and best, surpassing other horses in beauty, worthy of mighty kings. As the name suggests, these horses came from Nisa, now in modern Turkmenistan.

The breeding of the horses eventually called Akhal Teke by the Russians went on uninterrupted for almost three thousand years until the arrival of the Russian Empire in the late 19th century. Then in 1928, Joseph Stalin passed a law making it illegal for private individuals to own horses. Animals, including Akhal Teke horses, were forcibly taken to collective farms. About half of all Akhal Teke horses in the country died or were slaughtered for food (Turkmen refused to eat them). A famous ride to Moscow from Ashgabat by a group of horsemen in 1935 allowed the exemption of Akhal Teke from collective farms, saving the breed.

After independence and the fall of the USSR, the Turkmenistan government has taken measures to increase the number of Akhal Teke horses, both publicly owned and those in private stables. There are currently about 6,000-7,000 Akhal Teke horses worldwide.

The county’s current president, Gurbanguly Berdymukhamedov, is a huge fan of the Akhal Teke and has taken the title The People’s Horsebreeder.

He has written two books on Akhal Teke horses, where, in between praises of the breed are photos of him riding and/or posing with horses, giant billboards of the president riding a horse and beatifically looking down upon Turkmen in traditional clothing, and inexplicably, random photos of the president doing regular everyday stuff, such as riding bikes or taking breaks from jogging.

In any case, you can read both The Flight of the Celestial Race Horses and Akhal Teke – Our Pride and Glory, in English, online.

Akhal Teke horses are also given to (some) visiting foreign leaders, such as to Xi Jinping in 2014, as gifts. If China has its panda diplomacy and Australia its koala diplomacy, it seems that Turkmenistan has its Akhal Teke diplomacy.

Visit to the Ashyr Private Stable

On the same afternoon as my arrival to Ashgabat and after my short visit to the ancient Parthian fortress in Old Nisa, Sergey brought me to the Ashyr, a private stable around 50 kilometers to the West of Ashgabat.

The stable is owned by a man descended from Cossacks who fought the Russians in the 19th century in the war to incorporate Turkmenistan into the Russian Empire.

The owner plied us with tea and biscuits while waiting for a large group of Japanese tourists. They also invited me to walk around the grounds and visit the stables and paddock to pass time.

There is a modern cement yurt available for tourists to rent. It has a tv, chairs, a bed, and a hookah, things not usually found in traditional yurts but expected in hostels/hotels. Interested tourists have to make reservations ahead of time. Unfortunately,  it is very hard to get ahold of the stable owner through the internet since social media is not really a thing in Turkmenistan. Reservations have to be made through local tour agencies.

As soon as the Japanese tourists arrived, we were given a short lecture on the history of the Akhal Teke and a few demonstrations by horsemen who actually know how to ride them.

Several horses of different colors were trotted out and everyone was allowed to touch them if they want.

Because of its intelligence, strength, and size,  an Akhal Teke needs a strong hand to train. According to the stable owner, young stallions are paired with and trained by Turkmen boys as young as 6.

I stayed behind after the Japanese tourists left for my promised ride.

I have ever only ridden stationary horses and ponies on a slow trot before so I was a bit nervous, especially when told that horses can smell fear. But the stable staff were nice and just told me to calm down and enjoy the ride since somebody (three people!) will lead my horse.

Here’s a video of me smiling smugly while riding.

PrevPreviousTaxation on US Stocks of Non-Resident Aliens
NextFIRE-ing in Developing Countries: Does the 4% Safe Withdrawal Rate Apply To Us?Next