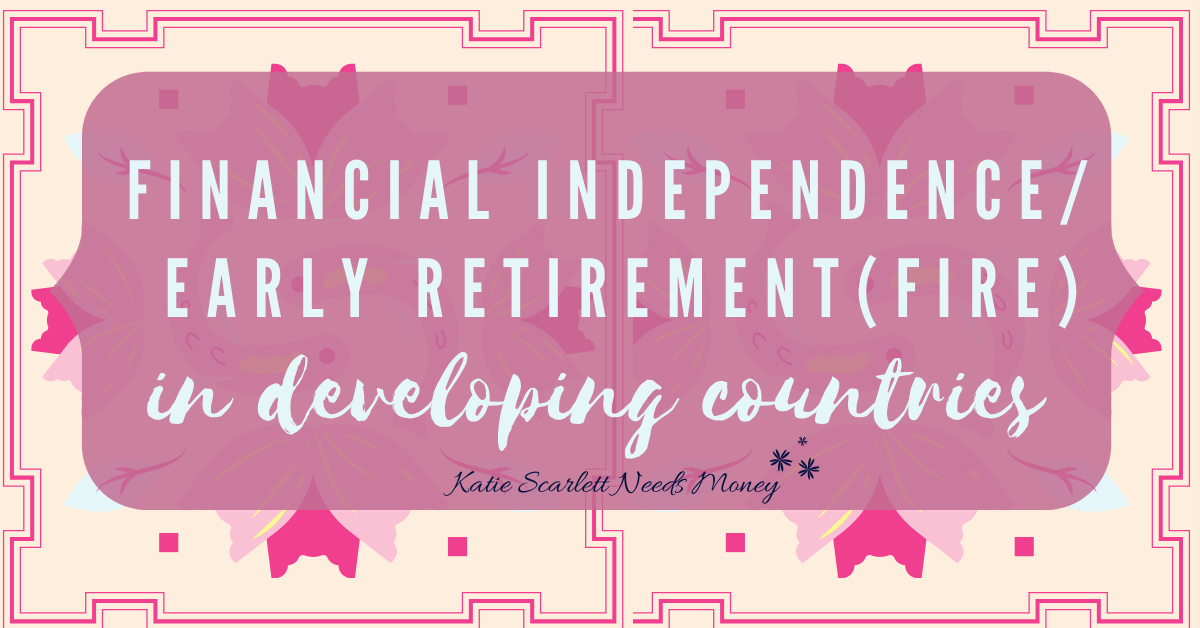 For the past few days, I’ve been trying to write a post about challenges in achieving FIRE (financial independence, retire early), comparing the situation of those who live in developing countries versus the experiences of people who live in developed, Western countries.

It seems obvious that our experiences in developing countries will be different from the experiences of people in the West but I want to still write these challenges down to serve as food for thought for people like me who are on this FIRE journey, as well as to start a discussion.

If you’re not familiar with the FIRE movement, you can read this primer I wrote first before you proceed.

The FIRE movement started and gained momentum in the West, specifically in the USA. It was spread to the rest of the world by bloggers like Mr. Money Moustache, JL Collins, Big ERN of Early Retirement Now, and many others like them who were able to achieve FIRE by following more or less the same principles.

A very general summary of the current FIRE strategies of well-known FIRE personalities reveals that they:

These general guidelines are followed by people who want to achieve FIRE, no matter where they are in the world.

Non-US FIRE blogs that I follow – in Canada, Europe, and even in the Philippines – all base their FIRE projections on the 4% safe withdrawal rate rule.

In practical terms, we calculate our annual expenses and multiply that number to 25 to come up with THE NUMBER.

THE NUMBER is the amount that we should have in our investment portfolios so that we can FIRE.

According to the 4% safe withdrawal rate rule, we can sustainably withdraw 4% from our portfolios annually to fuel our FIRE and be able to leave the principal amount to our heirs when we pass.

The 4% safe withdrawal rate rule is based on the paper Retirement Savings: Choosing a Withdrawal Rate That Is Sustainable, also known as the Trinity Study because its writers are based in the Trinity University in Texas.

Some of the key conclusions of the Trinity Study (verbatim from the study but emphasis supplied) says:

In short, a portfolio made up of at least 50% common stocks, with a withdrawal rate of 3% to 4%, will help retirees keep the value of their investments until death.

Amazing right? Just allocate at least 50% of your portfolio in common stocks through equity index funds then put the rest in bonds, and you should be able to safely withdraw 3-4% from your portfolio annually and you can have a sustainable retirement.

UNDERLYING ASSUMPTIONS OF THE TRINITY STUDY

Is it that simple though? Reading the Trinity Study would reveal that the 4% safe withdrawal rate is based on the following underlying assumptions:

Now that these underlying assumptions are brought up, we realize that our current reliance on the 4% safe withdrawal rate is faulty. Very few of us in developing countries are invested in the S&P500 and long-term, high-grade US corporate bonds, let alone be 100% invested in these instruments.

Most of us are invested in our national capital markets or are invested in totally different assets like real estate. The 4% safe withdrawal rate is specific to the S&P 500 and long-term, high-grade US corporate bonds.

How about in other countries? Is the rule applicable to other developed or Western countries?

HOW DOES THE 4% SAFE WITHDRAWAL RATE FARE INTERNATIONALLY?

Just to get more information about this issue, I tried to look for more studies about the sustainability of the 4% rule in other countries. It’s possible that other capital markets outside of the USA are able to support the 4% safe withdrawal rate, right? Luckily, I found a paper which studied 17 developed countries.

The paper, An International Perspective on Safe Withdrawal Rates written by Wade Pfau (blog version available here for easy viewing of tables), revealed that outside of very few developed countries, the 4% safe withdrawal rate is not sustainable.

The paper reveals that:

The 4% withdrawal rate provided “safety” only in 4 countries only in overly optimistic assumptions! This basically translates to zero countries because nobody has perfect foresight.

Except for Japan and South Africa, the countries in the study are all developed Western countries. And none of these countries are able to achieve the 4% perfect withdrawal rate. (P.S. This is not my conclusion, okay? This is Pfau’s conclusion so don’t come for me about this. I did not conduct the study, I’m just citing it. Thanks.)

I hate to be the bearer of bad news but, for those of us who are in developing countries, the 4% safe withdrawal rate does not apply. To recap:

Now, I know a lot of personal finance experts have successfully FIRE’d using the 4% rate.

My current favorites are FIRECracker and Wanderer of Millennial Revolution, who are Canadians and recently released a book, which I looooooove (review coming up). I won’t be weighing in about the sustainability of the 4% rule in the US and Canada because, well, it’s not my horse, so to speak.

So far, there are no studies about the sustainability of the 4% withdrawal rate in developing countries, because, come on!

Let’s say that you think Pfau’s study is simply incorrect and that you’ll still follow the 4% withdrawal rule. Keep in mind that for it to work:

If you’re not invested in the US capital markets, you’d have to rethink your strategy since the Trinity Study does not apply to you.

If you want to invest in the US stock markets, you’d have to open an online brokerage account. I personally have one with TD Ameritrade and you can read my experience about opening an account with them here. If you want to learn more about the tax implications, you can read this related article.

What can we do about it? Frankly, I don’t have an answer for you. Do you know of other alternatives to achieve a sustainable FIRE for those who live in developing countries (as citizens and not as a means of taking advantage of geographic arbitrage)? Please share in the comments.

No need to read now? Pin for later. 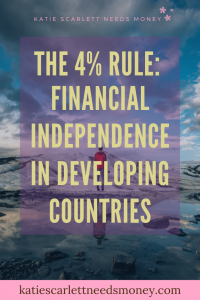