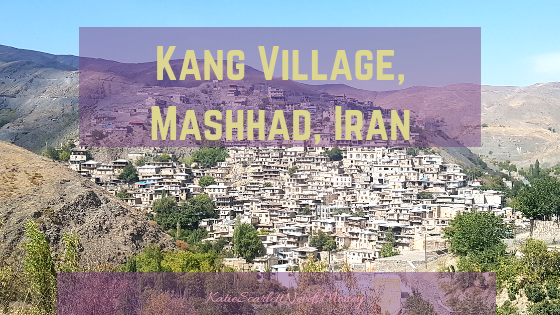 This post was first published in my old travel blog, Erudite Traveller on 22 November 2017.

It was in Kang Village in Mashhad, Iran, that I learned how to say no five times before accepting offers of food and drinks.

Taroof, the Persian custom of civility and deference, can be a landmine in local – foreigner relations. Persians make offers that they expect will be refused. Its basic component is politeness; by a complicated dance of offers and refusals, people show their respect and deference to one another.

Accept offers too early and the offerer will be put on the spot and forced to do something they didn’t really mean to in the first place. Reject all offers and you might offend your would-be patron. I settled on five refusals as a compromise between eager acceptance and offending refusal.

Until that morning, I didn’t know of Kang Village’s existence. Reza, the son of the owner of Vali’s Homestay (a place in Mashhad popular with foreign travellers), asked if I wanted to visit. He said Kang is an ancient village with stacked mud houses. I was intrigued.

Iran is a country of beaten-up cars and well-kept roads. Its drivers are crazy. Reza, who speaks like an American teenager or gaming YouTuber (“Duuuuuuuude…. who does that? Seriously?”) was constantly in a fight, both real and imagined, with fellow drivers. To be fair, basing on the way they drive, I’m sure they are crazier than Reza.

My firsthand experience with taroof happened while Reza was away buying water. Armed with my refined cultural sensitivity, I demurely refused offers of walnuts, chocolate pies, and tea. But what to do when they crack open the walnut, open the pie package, or bust out the tea set and start pouring for you? Should I still refuse? Reza acceded that yes, despite taroof, they really meant to feed me.

I am constantly amazed at the generosity of strangers.

Most foreign visitors in Mashhad stay in Vali’s Non-smoking Homestay.

While there are a lot of hotels in Mashhad in all price levels, many of them do not have English-language websites or English-speaking staff. Vali and his son, on the other other hand, are fluent English speakers and are used to dealing with foreigners and tourists.

They also offer tours to neighboring cities and nearby sites. The Kang Village tour costs USD 75 per person.

The setting of the ancient Kang Village in Mashhad, Iran

Kang Village is about 48 kilometers and around an hour drive from Mashhad, an ancient oasis Silk Road stop, Iran’s second largest city, and its spiritual capital. Kang Village is also near Nishapur, known for its turquoise mines, which produces the best in the world (and if you’re buying in the area, it’s very affordable). Nishapur is also famous for the massacre of its more than one million and seven-hundred-fifty thousand inhabitants by Genghis Khan’s Mongol hordes after his favorite son-in-law was killed (history is unclear if accidentally or by design) by a citizen.

The origin of the name of the village is lost in history. Either it’s named after a bundle of firewood or after a  species of large bird common in the area.

People tell fabulous stories about Kang. It is said that ancient bandits built it as a hideout. Villagers claim that Kang has already existed when Mashhad was still underwater, a claim that people of Mashhad scoff at. It is also said that the village was able to avoid the Mongol horde due to its strategic location up in the mountains where no horse can reach. Maybe the Mongol hordes just didn’t notice them.

What’s clear is that Kang survived more or less 3,000 years, including the onslaught of natural disasters such as earthquakes, extremely cold winters, and drought, as well as escaped human destruction.

Where your house is located indicates your status within the village. The higher your house, the higher your status. In a place where somebody’s roof is somebody else’s floor, the elevation the houses is a clear indication of hierarchy. People are, in an almost painfully literal sense, either above you or below you.

Villagers make their living through agriculture. Well-tended orchards of apples, cherries, walnuts, grapes, and white berries surround the village. During the walnut season, it is common to see men with their hands stained black from removing walnut shells.

The residents of Kang Village belong to five families. In the long years that they have lived together in such a small area, they have intermarried, making the village sort of like a huge extended family.

The village’s location is both a blessing and a curse. The snow provides irrigation to the village’s orchards, its main source of livelihood. At the same time, the bitter winter cold drives many of the inhabitants away to Mashhad seeking warmer climes and reliable electric heating.

Majority of the houses were constructed from mud and wood, many with additions of precarious porches held together with more mud and prayers. Donkeys transport goods up and down the village. Cars and trucks are also increasingly being used as the local government have built roads reaching the top of the mountains.

I was in the village during Muharram, the height of tourist season for Mashhad. Several female students from the nearby Ferdowsi University (one of the best in Iran, I was told) were conducting a survey among the Kang Village visitors. I was asked how I planned my trip to Kang.

I told them I didn’t. I literally only heard about Kang that morning. I was probably the first Southeast Asian seen in the village. Which was great because as much as I was fascinated with the village and its residents, they were curious about me as well. Therefore, I was invited into all sorts of things, and I wasn’t being taroof-ed too.

Their curiosity was that I was invited to attend a feast in a mosque. To my regret, I had to beg off.

Kang as the Next Tourist Destination

The local government is promoting Kang Village as a tourist destination. With the nearby Mashhad already killing it in terms of tourism (seven million arrivals during Muharram alone and double that the entire year! There are entire countries with smaller tourism arrivals numbers than Mashhad. ), it’s only a matter of time until tourist start flocking to Kang to escape the overcrowded city center.

Reza told me that there are training being conducted for tour guides to Kang Village. He took one of the classes.

Accessibility is also being improved. The dirt and mud alleys within the village have been replaced with cobblestones for easier navigation during winter when even pack donkeys have difficulty going up and down the village. Paved roads have also reached the top of the village, up in the mountain.

I was glad that I was able to see and experience Kang Village. Ancient villages are rare to find; ancient villages still alive and vibrant after millennia of continuous existence are much rarer still. 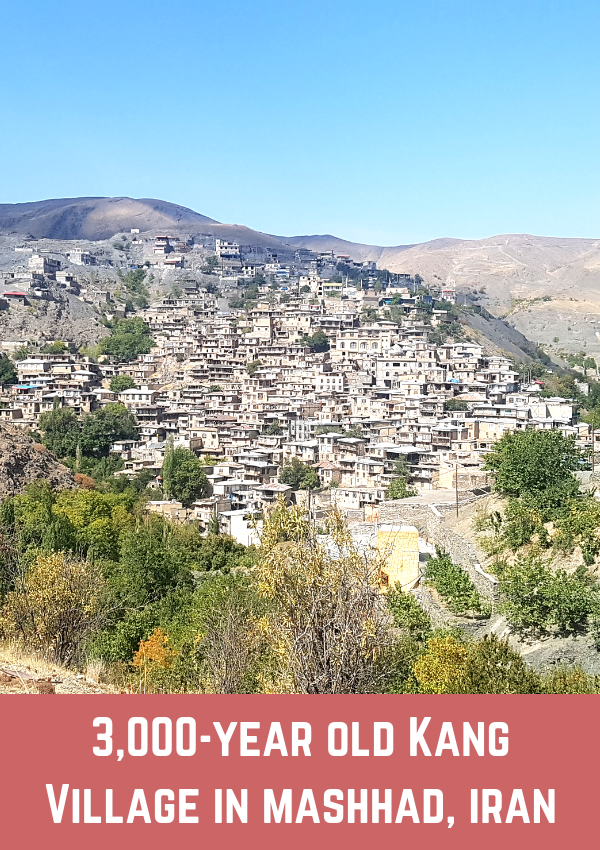