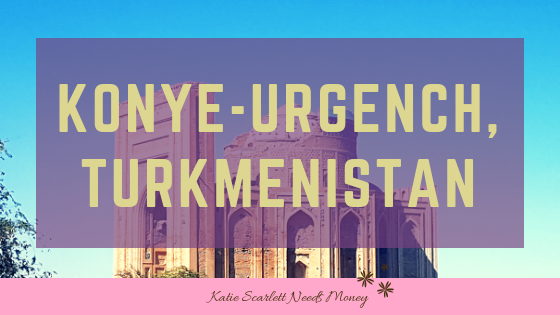 After saying goodbye to the Darvaza Gas Crater, we took off for a short tour of Konye-Urgench before I cross the border to Uzbekistan. We left at 9 a.m. since Konye-Urgench is 270 kilometers away, or around 3 and a half hours of driving.

I really debated with myself whether or not I will visit Konye-Urgench. My next destination after exiting Turkmenistan was the former slave trading town of Khiva, now in Uzbekistan. The nearest border exit going to Khiva is through Dashoguz, around 2 hours away from Konye-Urgench, and it was reportedly easier to get a cab to Khiva from Shavat, the Uzbek side of the border than from Hojeyli to Khiva.

In any case, my curiosity got the best of me. I wanted to see the remains of the city destroyed by two of the most fearsome warriors of all time: Genghis Khan and Timur.

Sergey, my guide, also strongly suggested that I go to Konye-Urgench. Unlike Samarkand, Sergey said sounding superior, Konye-Urgench is authentic, kind of implying that Samarkand maybe, just a little bit, not to say anything bad about the city you understand, inaccurately restored.

The Tragic History of Konye-Urgench

The ruins of Konye-Urgench was inscribed in the list of UNESCO World Heritage sites in 2005 for the integrity of its ruins. Having been abandoned for 300 years and then used by local residents as a graveyard, the ruins were mostly intact and better preserved than other sites in Central Asia. It certainly is better preserved than Merv and Old Nisa.

The ruins contain mausoleums, a mosque, and other buildings from the 11th to 16th centuries, including the famously sophisticated Turabek-Khanum Mausoleum.

According to the Zend-Avesta, the holy book of Zoroastrianism, Ahura Mazda created 16 perfect lands, including Gurganj (the ancient name of Konye-Urgench), Merv, and Samarkand, which my favorite Silk Road city.

Previously known as Jurjan, Jurjaniya, Gurganj, and Urgench, the original city was built along the banks of the great Amu Darya river, the waters of which was devastatingly used by Genghis Khan to flush out the Khwarezm defenders of the city in 1221.

Because of its location on the Silk Road, the political history of the region and of the city is awash with a hodge-podge of both pre-Islamic and Islamic rulers, governors, and usurpers, from the Scythians, Oguz, Seljuks, and of course the Achaemenids, Sassanids,  Anushtegins (wiped out by the Mongols), Ghazvanids Timurids, to the Uzbeks (I skipped a lot but you get the point), then eventually to the Romanovs, the Soviets, and finally modern Turkmenistan.

The city is of special fascination to students of history because of the awesome (in the sense of your mouth agape in horror awe) and efficient destruction served by Genghis Khan and his hordes. The Mongol invasion of the original Urgench and the rest of Central Asia is the stuff of legend.

The Persian historian Juvaini wrote that in 1218, Genghis Khan sent a trade caravan of around 450 men to the Khwarezm city of Otrar (now in Kazhakstan) to boost commerce. The governor of Otrar accused the traders of being Mongolian spies, confiscated their caravans and executed them.

Although it may sound like a huge miscalculation in hindsight, the Khwarezmian leadership did have reason to be suspicious. Genghis Khan had just finished conquering southern China and just won his war with the Jurchens in the north. It was a logical deduction that he will then set his sights to the rest of Asia next.

Then even as now, the beheading of ambassadors and diplomats was bad form. Ambassadors are the avatar of the leader. By killing the ambassadors, it was as if Genghis himself was attacked by the sultan. Genghis was understandably provoked. Genghis retaliated by invading the Khwarezm Empire starting with Otrar, wherein retribution for his execution of the trade mission, the Mongols poured molten gold down Inulchaq’s throat and ears, Viserys Targaryen-style.

After Otrar, the Mongols proceeded to Samarkand, Bukhara, and Gurganj (Urgench). In Gurganj, the Mongols faced several challenges, not least was their inability to breach the city walls even with their top-of-the-line siege weaponry since the marshlands near the river were too soft to support the weapons (nowadays, almost no trace of the city walls which surrounded Gurganj is left).

The Mongol leadership was also facing a family drama. Jochi, Genghis’ firstborn, was promised that Gurganj will be given to him as a present and was anxious to preserve as much of the city as possible, in opposition to the strategy forwarded by his brothers. Read more about the family drama in Jack Weatherford’s Genghis Khan and the Making of the Modern World.

After seven months of siege warfare passed with heavy losses on both sides (more on the Mongols side than on the residents of Gurganj), Genghis finally breached the city and decimated it. Artisans, women, and children were sent to the Mongol homeland as slaves while the rest were slaughtered.  Juvaini said that Genghis dammed and directed the Amu Darya’s waters to totally destroy the city, a possible embellishment making the events of the invasion more dramatic than it already was.

After this, a lesser city would’ve been wiped out from the face of the earth, but not a city as grand as Gurganj. Despite being badly damaged the Mongols incorporated Gurganj to the Khanate of Qipchaq and renamed it Urgench. 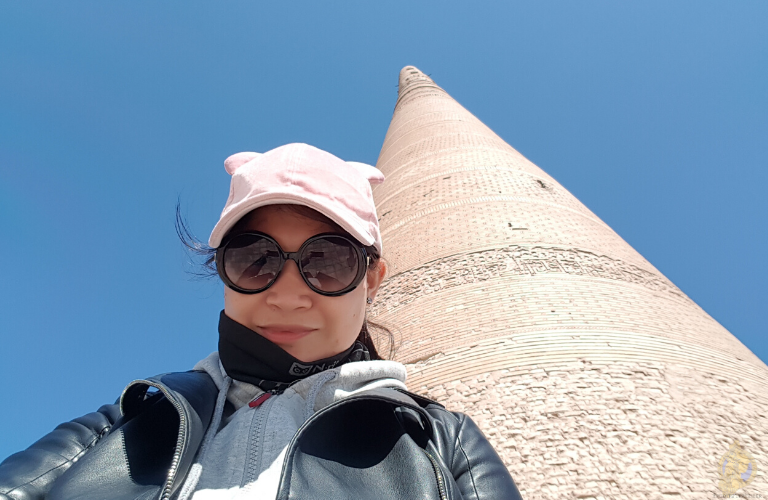 The golden age of Urgench rose from the ashes of its fall to the Mongols.  After the Qipchaq rulers adopted Islam as the state religion, Urgench became an important religious center and a seat of Sufi Islamic learning, culture, and literature.

In his Travels, Ibn Battuta in 1330s – more than a hundred years after the Mongol invasion – observed that Urgench was the largest, greatest, most beautiful, and most important city of the Turks, with people so numerous that at one point while walking in an intersection, he was not able to move because of the multitudes pressing against him at all sides. He also observed that no other people in the world were as excellent in conduct, generous in soul, and friendly to strangers as the people of Urgench.

Unfortunately to Urgench and her citizens, fate had another nasty surprise up her sleeve. In 1346 the Black Plague erupted in the heart of the Khanate and rapidly spread from the Volga to other cities.

Worse, in 1388, Timur rode from his capital in Samarkand and destroyed Urgench. It is still said by local guides that Timur didn’t want another city to rival his beloved Samarkand and eliminated its rival in the southwest.

The historian Ibn Arabshah who wrote about the travails of Timur in the appropriately titled The Wonders of Destiny of the Ravages of Timur, reported that after ten days of destruction only the mosque and its minarets were left standing. Timur was reported to have ordered that the ground on which the city stood be plowed and sown with barley.

Timur and the sudden change of course of the Amu Darya doomed Urgench. It was eventually abandoned in the 16th century.

Why You Should Visit Konye-Urgench

Ruminating on the tides of fate and history is always fun. Konye-Urgench is also home to some of the best examples of Islamic architecture in Central Asia and its monuments influenced the architecture of Persia and Afghanistan and later of India’s Mughal Empire.

Besides the architecture, Turkmen still visit Konye-Urgench for pilgrimage. While I was there, groups of young people were performing rituals at the foot of the Kyrk Molla (Forty Mullah) hill, circumambulating around a wooden makeshift arch decorated with a doll and pram. I was told that the ritual was so that the pilgrim is sent a baby.

Local Muslim pilgrims were also in the habit of building small piles of rocks into the likeness of whatever they were wishing for. For instance, if they were praying for a house, the rocks will be shaped into a house. These piles littered the walkway from the Turabek-Khanum mausoleum to the minaret.

I’ve seen the same practice in the Buddhist temples in Korea where pilgrims construct similarly shaped piles of rocks around their temples.

As previously mentioned, the architectural ruins of Konye-Urgench are famous for their beauty and sophistication. The Turabek-Khanum Mausoleum is Konye-Urgench’s most recognizable ruin. The geometric patterns on the underside of its domes represent the 365 days of the year, the 24 arches immediately below the dome the hours of the day, the 12 bigger arches the months of the year, the four windows represent the four seasons.

The Il Arslan Mausoleum is famous for the distinctive zigzag pattern of its wooden roof tiles while the turquoise-domed Sultan Tekesh Mausoleum houses the tomb of the founder of the Khwarezm Empire.

I was able to enter both these mausoleums but didn’t take photos out of deference to the solemnity of the place. I copied the locals who entered and exited the mausoleums always facing the tombs. I’m not sure if turning your back to the tomb is disrespectful but I thought it prudent to follow the practices of the locals. As they say, when in Konye-Urgench…

It certainly isn’t the case in Samarkand’s Gur-e-Amir where Timur lay. Timur’s tomb of bluestone is regular-sized.

The Kutlug-Timur minaret is probably the most striking feature in Konye-Urgench. It was constructed with yellow clay brick and decorated with 18 bands of patterned brickwork, including the three bearing inscription in Kufic script.

Apart from these mausoleums and minarets, there are other structures not yet fully excavated, restored, or identified. The remains of the portal or gate to an unknown building is said to be the remains of a caravansaray but no further proof was found to support this claim.

Walking around Konye-Urgench should not take more than half a day at most. There are no restaurants or hotels nearby and if you’re planning on staying overnight in the area, the best course of action is to stay in Dashoguz.

After having a short lunch – my final meal in Turkmenistan so of course I had a local plov – I crossed the border to Uzbekistan to continue my Silk Road journey and visit the great cities of Khiva, Bukhara, and Samarkand.

PrevPreviousReview: Quit Like A Millionaire by Kristy Shen and Bryce Leung
Next3 Pag-IBIG MP2 Hacks For Advanced InvestorsNext