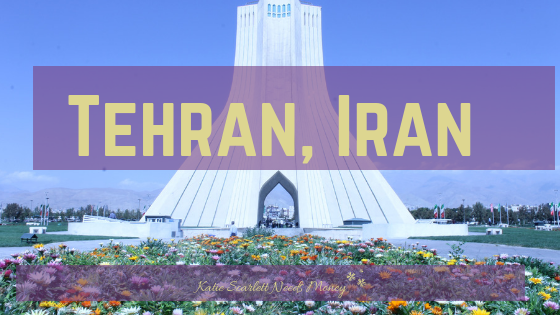 I knew that my trip was off to a roaring start when my Thai Airways plane en route to Tehran announced that alcohol is to be served less than an hour into the flight.  I have sworn off alcohol due to my fear of hangovers but decided to join in on the fun. Alcohol is strictly prohibited in Iran; who knows when I will have it next.

Later in the trip, I had dinner in a restaurant along Valiasr in Tehran’s downtown district which listed mojitos (peach and mint) on the menu. My enthusiasm was doused when I was informed that it was to be virgin.

Almost everyone, except babies, children, and the very devout, availed of the free drinks. It’s as if people were making the most of the remaining time left to enjoy alcohol freely. Besides, what better way to spend the next few hours in our economy seats than with a bit of a buzz.

The absence of alcohol and the government-mandated covering up of the female form are only two of the number of things visitors need to know before visiting Iran, especially those who are coming in from different cultural backgrounds.

Despite having more than 15 million residents in the entire Tehran Metropolitan area, the Middle East’s largest city, there are comparably fewer direct flights to Khomeini International Airport than to other Middle Eastern capitals. Most of these are flying in from neighboring countries, but there are also some flights from Europe and a few from Southeast Asia. Logistically, it makes sense to fly to a hub (Dubai, London, Bangkok), then fly to Tehran from there.

I flew with a stopover in Bangkok but such flights are no longer available due to the sanctions. Booking flights between airports in Iran can be done via Momondo.

Similarly, the selection of accommodations in Tehran is limited. There is no Airbnb, and booking.com options, usually so trusty, are few and overpriced. There are a few available hostels through Hostelword. However, for those who are looking for an affordable hotel your best bet is to check Tripadvisor for individual listings then contact the hotel directly via email.

That being said, I highly recommend Hotel Markazi, which is near a subway station and within 2 kilometers of Golestan Palace. Plus, they accept payments in US dollars AND serve really delicious white goat cheese for breakfast.

Bring cash, either US dollars or Euros.  Iran had been isolated from the international banking system through international sanctions until early 2016, hence, international credit and debit cards are not yet accepted, even in big hotels.

Money changers will not be able to/refuse to exchange more than USD 100. The currency exchange in the Imam Khomeini International Airport only exchanges USD 100 per person.

The exchange rate at the time of my visit was USD 1 = IRR 33,000. Locals interchangeably quote rial and toman the older, discontinued currency. Just multiply the quoted toman amount to x10,000 to get the value in rial. I’ve been told that times are now harder for Iranians due to the resumption of US sanctions, so exchange rates must be astronomical.

People were willing to accept dollars. I used US dollars in restaurants, shops, even taxis. Just ask if you can pay in dollars instead of rial. The worst they can say is no.

Line and Whatsapp work. Some VPNs work because I know people who are living in Tehran who have access to Facebook, so I suppose they have VPNs. But the ones I was using definitely didn’t.

Ashura and Muharram fall on different days on the Gregorian calendar every year, moving 11 days. In 2017, Ashura started Friday evening, 29 September, and ended on the evening of 30 September. Check online if your travel dates coincide with Ashura and plan accordingly.

As far as I could tell, the guideline for dressing in public for women is Tehran goes like this:

Skinny jeans may be acceptable as long as the behind is covered by the top. No, wearing black is not required, unless it’s Ashura (or maybe other religious holidays) and everyone is commemorating the death of a martyr then yes, black is preferable, but still not required.

I puzzled an hour before arrival on how to ensure that my hair cover doesn’t fall off and won’t show a bit of hair, trying to recall intricate knots I learned in Girl Scouts twenty years ago. It was the part of the trip I was most paranoid about.

Will I be flogged if I show my ankles (no, as attested by the many women traipsing around Tehran in various footwear, many showing un-socked ankles)? I know Iranian women love fashion just like their sisters in other parts of the world and that many Iranians, both females and males, are calling for the abolition of hair cover leading to the popularity of My Stealthy Freedom movement. I wondered if I can use the clueless tourist excuse…

In any case, my outfit consisting of skinny jeans, large long-sleeved plaid shirts, unicorn sweater, sneakers, and darkish head scarf failed to elicit any disapproving look/comment, so I guess, it was acceptable.

Although museums and the Golestan Palace were closed, I was still lucky since I did not experience Tehran’s notorious traffic and pollution. Even the smog lifted granting me a sight of the Alborz mountains encircling the city.

I might have imagined it but Tehran’s sun cast a soft yellow light, and, coupled with views of the sides of some apartment buildings decorated with murals in pastel of young men toting long guns smiling beatifically into the distance, made visiting Tehran on Ashura a slightly surreal experience.

I was informed that these young men were martyrs who fought during the Iran-Iraq War in the ‘8os. If I had one regret during my stay in Tehran, it was not taking photos of these murals.

I was to leave Tehran the day after and was worried that there would be nothing to do and see. I needn’t have worried. Here are some things to do and places to go to while visiting Tehran on Ashura, when everything was closed for the holiday.

WHERE TO GO IN TEHRAN WHEN EVERYTHING IS CLOSED

Azadi Tower (Freedom Tower) is one of Tehran’s most Instagram-ed and its most iconic structure. The 148 feet structure, made from the finest white Esfahan marble, commissioned by Mohammad Shah Reza Pahlavi in 1964 to commemorate the 2,500th anniversary of the foundation of the Persian Empire by Cyrus the Great (Kūruš in Farsi).

It had been the backdrop of Iranian political events since. It was witness to the 1978-79 Iranian Revolution which overthrew the Shah of Iran leading to the foundation of the Islamic Republic and the leadership of Ayatollah Khomeini. The Azadi Square was also the center of the 2011 protests surrounding the Iranian Green Movement which demanded the removal of then- president Mahmoud Ahmadinejad. It is also the backdrop of many a selfie and jump shots.

The square has carefully tended flowerbeds and fountain, inspired by Persian gardens. The underground museum closed for Ashura, but just sitting down and thinking about the historical and political importance of the Azadi Tower in Iran’s history is an experience in itself.

The Tabiat (Nature) Bridge in the northern, less crowded part of Tehran, is a popular place for locals to hang out as it connects two parks and provides a great vantage point to observe the older part of the city.

It has three levels and connects the Taleghani Park and the Abo Atash Park, which are separated by a highway. This means that you can walk across the bridge three times and see three different perspectives of the same views, which I did.

The two parks the bridge connects have a different ambiance. Taleghani Park is a great place to just read under the trees or to take quiet walks. It’s also a fantastic place to jog and exercise. Playspaces for children can also be found there.

There are some nice restaurants in Abo-Atash Park. It also has an ampitheatre and a giant tent where families lay down mats for picnics.

I enjoyed this place so much as I was able to interact with locals and domestic tourists, who were eager to talk with me and take photos.

When they asked where I was from, I pretended to be from Korea at first,  I’m very paranoid about people knowing things about me when I travel, so I usually say I’m from a different country and use a traveling name if I can.  But then I realized that I may be the only Southeast Asian and/or Filipino they will ever encounter in their lives.

Walk around the city

Milad Tower, Tehran’s highest that has a viewing deck and restaurants overlooking the city was closed, so I decided to look for something that connects Tehran to Seoul.

See, Seoul’s main street in the Gangnam area is called Teheran-ro, which was a result of a sister-city agreement in the 70s.

I cannot rest until I confirm that Tehran met the terms of the agreement and dedicated a part of its city to Seoul. I didn’t find a Seoul Street but I did find a Seoul Park, around 2 easily walkable kilometers from Abo-Atash Park in a chic residential area.

My stay in Tehran was really short as it was only a pitstop on my way to Central Asia, but I was pleasantly surprised with my experience in the less than 48 hours I was in the city. I will definitely be back.

Disclaimer: This trip happened in September 2017, when the sanctions against Iran were lifted under the Obama administration and has not yet been reinstated by the Trump government. Travel to Iran is now much harder to organize because you have to fly in from Dubai or Turkey (and I’ve been told from Urumqi). Originally published in my old blog, Erudite Traveller in November 2017.